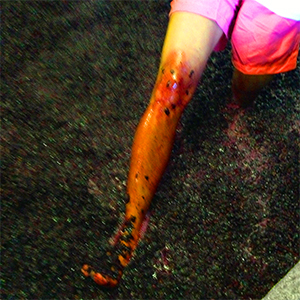 Arriving in Porto after a weeklong Hong Kong wine fair, a barrage of events and several hours with limbs contorted like origami on two sets of flights and one boisterous (but in true Portuguese fashion, only mildly boisterous) car ride, I will admit I was simply not as excited as I should have been to be there.

When you first encounter it, wine is a world filled with magical places, larger than life characters and legendary evenings livened by a never-ending stream of bottles. The more you hear about wine, and the more you are drawn into it, the more the magical places can start to become one shapeless mass, the once distinctive characters faceless and the pleasant stream of bottles like a violent torrent. The city of Porto is absolutely beautiful – all exquisitely tiled, terra cotta roofed buildings tucked neatly into the folds of the hills that caress the Douro river – but on the morning of my arrival, it might as well have been Mongkok.

I expect sympathy from nobody; after all, as my fellow journalist Mads would say later during what would turn out to be a glorious Portugal trip, we wine writers are exposed to extraordinary opportunities that are simply not accessible but for our jobs. We were there to visit Porto, then spend the week driving the length of the Douro valley, stopping at the properties of each of the five “Douro Boys,” an inspired group of winemakers who have made their names in dry wine rather than the more traditional Port of the region, culminating in their tenth anniversary auction. All in all, an enviable lineup.

However, those who have been following wine for a while (even as amateurs) will concede that as you get to know it better, what with the rising tide of wine that now seems to flow from every crevice of the earth, real enthusiasm for wine risks being drowned in a flood of too much information. The wine world assaults you with detail you simply don’t need. Because we wine people often find that wine itself is difficult to differentiate with words – one person’s plum is another’s blackberry – the tendency is to try to emphasize the uniqueness of a wine’s origins, glomming onto the soil, the climate, the landscape, the grape varieties, even the winemaking if there’s something to say.

Portugal’s Douro region has all of these: the soil – a friable grey schist, sheets of which can literally be peeled from the rock face by hand – an arid, almost desert climate suitable only for gnarled vines and olive trees, and an otherworldly topography carved out by the river for which it is named, alternately evoking the rolling purple hills of Fantasia, and the precarious, improbable crags of Dr. Seuss.

You like indigenous grape varieties? Douro has at least forty – the inky touriga nacional is head honcho, flanked by its homeboys touriga franca and tinta roriz (Spain’s tempranillo). Much winemaking is still done in granite lagares, essentially wide, shallow kiddy pools of grapes stomped by teams of the young and (initially) enthusiastic in an activity that we personally discovered more closely resembles a four-hour step class than a bacchanalian romp. This all very well, and very interesting we may say, but at the end of the day what is fundamentally different about this wine and this place?

This question began to be answered in earnest on our first day in the Douro, where we stopped only after the hours (and hours) of bus ride needed to reach Douro Superior, the section furthest inland, flattest, hottest, driest and most recently planted, and a mere stone’s throw from the point where the Portuguese Douro becomes the Spanish Duero. The land here is more tortured even than it is to the west; that hardiness can be tasted in the wines, which are savory and dark, almost taciturn in some vintages.

Here we met the delightful Francisco “Vito” Olazabal of Quinta do Vale Meão, self-proclaimed “old man” of the estate, and repository of more Douro history than you would have thought could be fit into one relatively unimposing figure. Sitting with us in the shady yard in front of the family house, Vito outlined in the impeccable English of one who’s spent a career at Port shippers the story of his great grandmother Dona Antonia Ferreira, the Grande Dame of Douro who amassed a real estate portfolio that would put many a Hong Kong taitai to shame. In an age where most women were expected not to work, she reigned over the Douro, buying up land like Manolo Blahniks, but eventually choosing this patch of land far east of anywhere that had ever been used for grapes before as her pet project. She planted a vineyard where once there was nothing.

In 1952 Ferreira, the Port house that bears Dona Antonia’s name and where Vito was Managing Director until 1998, produced what is considered the first great Douro table wine (i.e. not fortified), Barca Velha, from the same patch of land that belongs to Vito and his family today. He can recall, he said, how in the early days of Barca Velha, with no electricity available to cool the fermenting must, truckloads of ice would have to be brought in from the coast. The greatness achieved by that wine was nonetheless a landmark in the evolution of dry Douro wines, and it seems wholly fitting that one of the Douro Boys should still inhabit its birthplace today.

The significance of the Douro Boys as a group is deeply rooted in this connectedness both to the land and to each other. The Olazabals and the Ferreiras of Quinta do Vallado both stem from Dona Antonia – an Olazabal even makes the Ferreiras’ wine. João Ferreira is married to a Roquette, the family that owns Quinta do Crasto, and Vito himself has some Van Zeller blood (the family that owns Quinta Vale D. Maria). Then there is the inexplicable Dirk van der Niepoort of Quinta de Nápoles (among many projects), who has no known family connections to the others but is the quiet ringleader anyway with his cantankerous personality and his delightfully eccentric wines. Many of the families used to make Port, but now focus primarily on the group’s unifying goal: to make dry Douro wines that are as important as Port.

The truth is that what we in the wine trade too often gloss over in describing a region is its people: this group of five quinta (wine estate) owners arguably are the Douro, as much as any crumbling rocks or terraced hillsides. While winemaker associations are almost old-hat today, it is key to remember that, in the words of one fellow wine lover (and realist) “wine growers are basically farmers, and farmers don’t like each other.”

That the Douro Boys do like each other is impressive since, despite all the interrelatedness, they couldn’t be more dissimilar as people or – to some extent – winemakers: the devastating Roquette brothers Miguel and Tomas recall Argentine polo players with their glowing tans, aviators and swooping coiffes (and their restored vintage river cruiser, Pipadouro), all of which is reflected in the boldness and bravado of their wine. The gravel-voiced cool cat Francisco “Xito” (son of Vito) Olazabal is his earthy, tough but deeply cool wine personified. Boyish, silver-haired João Ferreira, last seen killing it down the Douro in a zodiac, seems the kind of man who might bring you a bunch of the violets that waft off his wine. Niepoort, with his billowing curls and cherubic looks belying a caustic wit, looks like just the kind of mad inventor who should be popping out the occasionally ingenious curios that are his wines.

Then there is the cherry-toned flirtiness of D. Maria, which seems in total contrast to the imposing Cristiano Van Zeller, with his Father Christmas eyes and booming, sonorous voice. One ventures that this might be because, contrary to its membership in the Douro Boys quintet, Quinta Vale D. Maria is staffed mainly by women, and generally has what you might call a lighter-handed approach to winemaking (anything to avoid the adjectives “feminine” or “elegant”). Cristiano’s daughter Francisca Van Zeller (whom we will also avoid disparaging with the terms “elegant” and “feminine,” though she is both), only recently returned home to the farm, where she has taken on the marketing role, working alongside quietly confident winemakers Joana Pinhão and Sandra Tavares. Their presence is a delightful reminder that it is a woman who underpins the existence of this gang of five.

It also helps the Boys’ camaraderie that each has experienced critical success. About their recent spate of 90+ scores, Miguel Roquette said it best: “they play the music, so we dance, but we don’t live for that.” And one does get the sense that they mean it, enjoying the glory while it lasts but also busying themselves with generational projects like the mapping of varietal diversity in their vineyards so that their wines might maintain their complexity long after the critics’ light has refocused elsewhere.

That said, it is hard to stress enough the importance of The Boys for this region’s emergence on the world stage. When they first teamed up in 2003, a small, non-government group designed to represent and inspire a region was highly unusual. This year – as alluded to earlier – they celebrated their tenth anniversary of cooperation in grand style with an auction of a few hundred magnums of a table wine and a vintage Port created from a blend of their individual 2011s. Projects of this type are fairly unusual, requiring as they do that each contributor sacrifice his or her unique vision to the betterment of the whole. In order to decide on the ultimate blend, each winemaker submitted his individual take on what the character of the wine should be, all were tasted blind and a vote taken. “Twice we voted, and both times we picked Dirk’s,” Xito chuckled, “we didn’t want his to win, so we did it again and had to admit his was best.”

Dirk meanwhile got his own back, ribbing Xito for his recent decision to expand his previous lineup of two wines to three: “Why did you decide to make this, Xito?” he asked, pronouncing “Xito” rather more like an impolite English term than was strictly necessary, to which the latter just grinned. Niepoort, with his dozen odd wines, well realized that he is in no position to criticize. This togetherness but also distinct apartness is the perfect illustration of why this group is so key; like a pentagon, they have five individual faces all different but all linked into one greater whole.