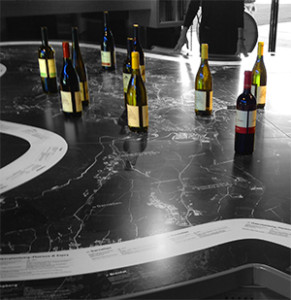 Anyone reading the paper lately can be left in no doubt that questions of who or what holds power are on everyone’s mind. In the realm of politics, it is hard for us to come to agreement, but the little world of wine tends to favor a more decentralized power. As wine consumers, we have come to prize above all things an essential “somewhereness” in wine (to dispense with the inescapably French term “terroir”), a term originally borrowed from politics.

Alto Adige or Südtirol, depending on how recently your forebears arrived in Italy’s northernmost region, is one that few could deny has made decentralized power work for them. As a semi-autonomous state of Italy, it is in the plum position of having a high percentage of its regional taxes pumped directly back into the region. Whether you support this or not, the number of other regions driven by artisanal agriculture who can claim to have kept all but 4% of its farmers on their farms over the past 30 years can almost be counted on your elbows. Add to this the fact that most of their farming involves hand work on perilously steep inclines and you can see what an achievement this is (picture ants climbing up pencils for a rough idea).

This is of course glossing over what is in fact a deeply strained history of relations between the area’s linguistic groups, but for which corner of Europe can we not say the same? Fortunately Alto Adige/Südtirol is currently much less concerned with in-fighting and much more concerned with communicating its somewhereness in a globalized economy.

Luckily for the region, along with its well-filled coffers it is blessed with a populace with a strong work ethic, innovativeness and devotion to the land, besides almost comically picturesque mountain vistas. Making intelligent use of what they know is a unique treasure, the winemakers of the region often conduct tastings right on the precipitous slopes of their near-vertical vineyards (let this serve as a warning to all those who partake of wine tourism in high heels).

This is not to say, however, that everyone agrees about where the somewhereness is to be found. Martin Foradori of Hofstätter, one of the most opinionated stakeholders, is convinced that identifying plots with a unique affinity for certain grape varieties (of which he owns a handful) is the only way forward. His ambrosial Kolbenhof Gewürztraminer may be the proof in the pudding. He hinted that the liberties being taken with vineyard names are holding the region back, and a Burgundy-style system of legally defined named vineyards is needed to curb this practice.

At least in appearance, all the key industry players seemed to agree with this strategy. Many of these are very well-funded cooperatives (no grimy old tanks to be found here!), like Nals Magreid (available from GRG wines), a cooperative which (unusually) spans the entire region, focusing on specific grape varieties from historically successful plots. The local cooperatives have managed to be a leading light for their region in a way that few others have. Arguably this is due to an organizational structure as vertical as the surrounding Dolomites. As the commanding Hans Terzer, director of the exceptional Cantina San Michele Appiano, made clear: though he is beholden to his stakeholders, the consensus he is most concerned with is a consensus of one (San Michele Appiano wines are available through Kerry Wines).

A bump in the “terroir” road to somewhereness is that AA/ST may simply have too many grape varieties to rely on the grape + land combo as their lead strategy. The casual wine drinker can almost remember Bordeaux’s left bank Cabernet, right bank Merlot, but they certainly can’t remember that St Magdalener, Appiano and Caldaro on the label all mean Schiava in the bottle (particularly because sometimes Schiava sometimes goes by the equally unpronounceable name Vernatsch).

However, AA/ST is helped by the fact that many of its key grape varieties are international ones – Sauvignon Blanc, Pinot Noir, Gewürztraminer and Pinot Blanc – but it doesn’t help that at least 2 of these are not particularly popular ones. Though our group suggested that Mr. Foradori might host an international Gewürztraminer conference to bring attention to the region, we sadly had to acknowledge in the end that International Gewürz Day hasn’t quite the allure of the world’s many Pinot Noir symposia. Looking for a different spin on regional identity, I even suggested to our local guide that AA/ST might be able to learn from New Zealand, which has similarly built its name around vibrant, varietally-labeled wines and an environmental focus. He said that he could see what I meant, but he clearly didn’t like it.

Like most regions in the so-called “old world” (essentially Europe, with a sprinkling of countries from around the Med), the region desperately wants to impress you with its history, its “historical-ness” if you will. But while history deserves to be remembered, identity needs to be focused as much on the present and future as on what has been the status quo. As suggested by Heike Platter of the local Laimburg agricultural research center, AA/ST’s somewhereness may be most closely linked to the spirit of mountain agriculture, and all the collaboration and careful husbandry that entails. After all, more than a particular site or grape variety, AA/ST has a unique asset that very few regions have managed to develop: a system of production that may function primarily through the direction of a few individuals, but is ultimately equitable. As the indomitable Mr. Terzer commented: “if they don’t like me, they can always throw me out.”