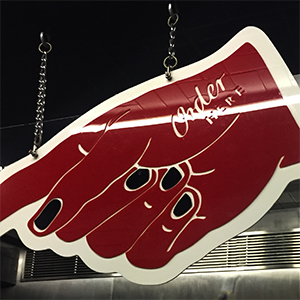 Before any parents reading this start composing sternly-worded letters objecting to this article’s subject matter, this isn’t an article peddling wine to fifteen year-olds. “Millennial” is a poorly defined demographic, sometimes described as those born post-millennium, but according to our ultimate millennial resource, Google, it is “a person reaching young adulthood around the year 2000.”

Millennials are simultaneously one of the most maligned and marketed-to groups ever. Employers bemoan their entitlement, laziness and constant demands for feedback while marketers wet themselves over the prospect of selling anything to them en masse.

Having partied like it’s 1999 in braces, spectacles and the company of my parents, I suppose I am a Millennial. However, I don’t pretend for a moment to represent the Millennial wine drinker. Having joined the wine trade seven years ago, I’ll admit I’ve had ready access to wines that, to use a Millennial phrase, are way above my pay grade.

However wine for Millennials is a subject close to my heart, having watched an industry I love dearly turn itself inside out to try to win the hearts and dollars of my less wine-soaked peers and, almost inevitably, fail abysmally. What is it that so many other industries have cracked that wine seems unable to? Not least among them, wine’s closest rivals craft beer and spirits, which ironically have remade two fairly generic categories in the image of wine and in so doing have thoroughly surpassed it.

One possibility is that craft beer and spirits are not patronizing. A genre like scotch whisky, arguably the peer of wine in complexity (not to mention expense), welcomes young people into the fold, encouraging them to geek out over malting techniques, distilleries and aging regimes. Wine, meanwhile, attempts to connect with “the youth” by putting cartoons on the label, assigning quizzical names like “Arrogant Frog” and “Middle Sister” and generally dumbing the whole thing down. These tactics work well for the mass market, evidently, but don’t often attract anyone to the far more profitable premium wine sector.

Dumbing down is not limited to young people, with wine usually taking the same approach to “new” demographics (like women) and new markets (like China). And yet neither of these groups – nor young people – necessarily wants simplicity. One China-based importer tells of constant proposals from wine suppliers offering simplified labels for the Chinese market. Most telling was a range of colorful, minimalist labels saying simply “Bordeaux,” and “Burgundy,” for which the importers’ client base outright refused to pay more than 40 RMB a bottle. In sum, maybe wine needs to stop assuming it’s the smartest person in the room.

Yes, this critique is a broad strokes generalization and disregards the massively geeky wine culture built around “natural wine” that has attracted young and less young alike in New York, Paris, London and even our own metrop’s cool kid hangouts like 121 BC and Cabane a Vin. However, with all due respect, there is a built-in limit to the number of customers who are turned on by sulfur-free, skin fermented whites and unpronounceable grape names (of which I am of course a card-carrying member). Something has to fill the vast chasm between the ultra-generic and ultra-specific.

Craft beer and spirits started from a place of relative simplicity and sexed themselves up with complexity. Wine has complexity in spades: the permutations of producer, grape and origin are virtually limitless, but this three-factor puzzle leaves many with no solid ground to stand on. To really start to understand and care about wine, one can’t simply go around drinking any Syrah or Burgundy one comes across. The real language in which wine lovers communicate – despite the disdain attached to the term “brand drinker” – is in fact brands, just like any other non-staple good. I don’t love all Yarra Chardonnay, but I’m pretty fond of Oakridge.

Official wine education is somewhat hamstrung because it (rightly) is not allowed to talk about brands. Instead the focus is on regions and grape varieties. Yet to my mind assuming that two Pinot Noirs grown on near identical, adjacent plots of dirt will taste the same is a pretty tenuous bet if they’re made by starkly different producers.

Currently, Millennial-targeting brands fail to make people fall in love with wine because they try to wipe out the complexity entirely, a la Yellow Tail bubbles (a rampant success, admittedly). However for premium wine, what brands represent above all is a guarantee of style and quality. Thus perhaps we should try talking about brands first, grape and ground second. Yes – to quote fellow wine commentator Fongyee Walker – I am probably going to get lynched for this but hey, I’m just saying.