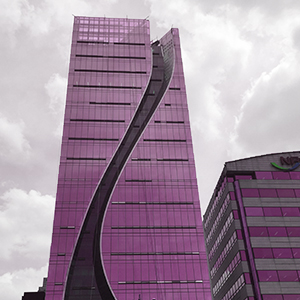 The origin story of this week’s column is especially dear to me because it is an ode to the bliss of a Master of Wine student’s post-exam life. You see, in order to preserve the sensitivity of my olfactory instrument (nose), I swore off perfume for about two and a half years (with, I confess, the occasional guilty lapse on very special occasions, like non-wine dinners).

A few weeks ago, while traversing the endless duty free concession that Heathrow subjects travelers to on both arrival and departure, I found myself for the first time in so very long, instead of whooshing by in a fruitless attempt not to inhale, free to sniff the air with wanton gusto. New perfumes abounded.

Though what I first encountered was a garbled mass of olfactory discord (especially by that truly godawful Thierry Mugler counter), gradually I wended my way to that one true light in a world of florid artifice: Hermès fragrances. Hermès has what in my more indelicate moments I refer to as “some kind of crack they put in there.” That is, some instantly recognizable and deeply addictive substance common to all Hermès fragrances that is like catnip to this writer’s Hermès-craving nose.

Is it the leather and benzoin in my longtime favorite Kelly Calèche (and incidentally also in Terre d’Hermès, for men, proving that crack knows no gender)? Or is it the cedar-sandalwood duo that underpins Terre d’Hermès and original Calèche; or perhaps the blend of exotic spice that suffuses the Jardin series? Whatever it is so seduces that I’ve found myself involuntarily trailing a person (usually, though not always, an unnaturally tan middle-aged man) halfway around the block before recovering my frizzled senses.

Once I’d pulled my head out of the cloud of (brand new) Eau de Rhubarbe Écarlate – top note rhubarb, middle note red berry, base (and potential crack candidate) white musk – I noted that most of the world’s top wines also have some kind of identifying “crack.”

How this unfortunate analogy continues is that this “crack” is often something slightly… unseemly. Rarely anything so boorishly obvious as the alleged constituents of the infamous “Secretions Magnifique,” wine’s “crack” is instead an almost indefinable note that isn’t exactly fruit, oak (vanilla is yummy, but hardly the stuff my addictions are made of) or even that general odor of decay that envelopes all wines as they age.
In a more strictly intellectual wine like Bordeaux (particularly Médoc), the crack might manifest itself as a blend of cedar, pencil dust and moist tobacco (sniff the lip end of a cigar sometime). This simultaneously ethereal and earthy aroma is to my nose the very essence of Bordeaux-ness.

Meanwhile the crack in most Pinot Noir is decidedly more indecorous. World’s Best Sommelier Andreas Larsson claims he likes any Pinot that floods his mind with dirty thoughts. Karen MacNeil of Wine Bible fame describes California Pinot as “the scent of a man who’s been out running in the heat.” However, disgust/attraction has its limits: “running 3 hours,” she says, “but not 4.”

Apart from its obvious sensual contribution to the enjoyment of wine, the crack perhaps act as a truly empowering tool of identification: a lightning bolt of sensory data to set the limbic system ablaze. Whereas other less triggering aromas in wine often pass ploddingly through the conscious realm of verbal thought – “what am I smelling here: red fruit or black fruit? American oak (coconut) or French oak (vanilla)? Mint or eucalyptus?” and so dully onward – the crack can push us straight to Barolo with road tar, straight to Rioja with hand soap and ether, straight to Corton Charlemagne with pungent struck match.

An issue with the crack (besides its name) is that it is inevitably deeply personal and hence not necessarily communicable. While “tar” is probably an acceptable descriptor in an MW exam, and “sweat” just about permissible if you’re describing an especially violent Sauvignon Blanc or Semillon, “pulse-point behind husband’s ear” is not (sorry husband).

Worse still, in some unforgivable instances, the crack can totally betray us. Here I will shamelessly take the opportunity to blame my embarrassing inability to spot the Bordeaux in my exams (no, I haven’t gotten over that yet) on the fact that for me they were simply lacking that Bordeaux crack (though Chateaux Léoville Barton and Berliquet who made them probably don’t agree).

Thus is there anything to be made of this inherently idiosyncratic, fickle and crudely named phenomenon? I think so, if for no other reason than that it adds interest to the tired old expression, “I don’t know a thing about wine, but I know what I like and don’t like.” Clearly, what we are all searching for in life (outside MW exams) is a wine that has our particular brand of crack in it.